Addressing a public meeting at his home town Nadaun, Sukhu blamed the previous BJP government for various misdeeds. He accused them for putting Himachal land for sale. He said that Govt is probing all irregularities committed during the previous regime. Sukhu also blame Dhumal to commercialise the name of the former Prime Minister Atal Bihari Vajpayee and claimed that it was Dhumal Govt who had renamed many schemes.

The HPCC president blamed Dhumal for uneven development of the region. He said that despite being a Chief Minister for ten years, he could not accelerate the development of Hamirpur. Sukhu also blamed Anurag Thakur for involving politics with sports as well. He accused that in the grab of Cricket, Anurag is trying to gain political mileage. He appealed to the people of Hamirpur Lok Sabha seat to give befitting reply to Dhumal and Anurag in the coming general election. 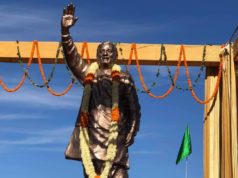