Himachal Pradesh Cabinet in its Meeting decided to enhance honorarium from Rs. 750 to Rs. 1,350 per month, of 2,220 workers engaged by Panchayati Raj Institutions for the purpose of operation and maintenance of water supply schemes in rural areas and re-designate them as ‘Water Guards’. This decision fulfills the announcement made by the Chief Minister in his State Level Statehood Day address at Sundernagar on January 25, 2012. Chief Minister Prem Kumar Dhumal presided over the Meeting.

With a view to make the Himachal Pradesh Civil Services (Premature Retirement) Rules, 1976, more practical and in consonance with the CCS Pension Rules, it was decided to delete the condition of 45 years of age limit and consider 20 years of regular service with satisfactory service record as sole eligibility criteria, to seek pre-mature retirement by any government servant, on giving three months notice in writing to the competent authority.

It was decided to expand the scope of allotment of government residential accommodation by including contractual employees into the list of eligible allottees for Government accommodation, including doctors, pharmacists and para-medical staff of Rogi Kalyan Samitis, recruited through prescribed recruitment agency alongwith regular government employees by amending the Himachal Pradesh Government Accommodation Allotment (General Pool) Rules, 1994.

Cabinet decided to allow continuation of the existing 9 Fast Track Courts in the State upto March 31, 2013 as a State Scheme. It was decided to issue ‘No Objection Certificate’ in favour of Nanda Institute of Nursing, Una; Satyam Educational Society, Puhara, Shahpur; LLR Educational Trust, Solan and Vidyavati Memorial Educational Society, Nurpur (Kangra) for starting B.Sc. Nursing and GNM Courses in Non-Preferred locations of the State.

It was approved to create one post of Joint Director in Panchayati Raj Department; one post of Mining Officer, 4 posts of Mining Inspector, 6 posts of Assistant Mining Inspector and 10 posts of Mining Guards in the Geological Wing of the Industries Department; one Assistant District Attorney and 3 supporting staff in newly opened Court at Nalagarh; 4 posts of Driver-cum-Operator in Department of Fire out of Ex-Servicemen. It was decided to open Primary Health Centre at Malyawer in District Bilaspur sanction one post of Medical Officer and one post of Staff Nurse to make the same functional. It was also decided to regularize services of 5 Junior Accountants engaged on contract basis in Panchayat Samitis in District Parishad Cadre.

It granted approval to the Amendments in Himachal Pradesh Fiscal Responsibility and Budget Management Act, 2012 and Recruitment and Promotion Rules, 2011, of District Panchayat Officer (Gazetted) Class-I. 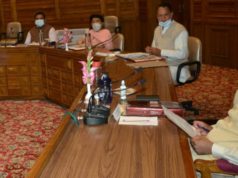