Secretary, Agriculture said that those farmers who were interested to take loan on maize, paddy, potato and ginger crops during the Kharif season can insure their crops by 30th September, 2011 and added that the scheme was mandatory for such farmers. He further said that the scheme is optional for non-loanee farmers, for whom the last date for insurance was 31st July, 2011. Ram Subhag Singh said that this scheme had proved beneficial to farmers in compensating for the losses incurred on account of natural calamities and other causes. He said that the insurance cover on general coverage for maize crop was Rs.15,800 and maximum Rs. 29,700 per hectare, Rs. 12,000 and Rs. 22,500 respectively for paddy, Rs. 1,03,100 for potato and Rs. 3,88,700 per hectare for ginger. The rate of premium according to the insurance cover on maize was 2.50 percent and 3.10 percent, 2.50 percent and 3.35 percent for paddy, 6.45 percent on potato and 5.30 percent on ginger. 50 percent subsidy on premium was being given to small and marginal farmers, he added.

He urged the farmers to avail the benefits of the scheme and added that they can contact the nearest Primary Agriculture Cooperative Sabhas, Rural and Commercial Banks or Agriculture Extension Officers, Agriculture Development Officers or Block level officers of the department for getting their crops insured. 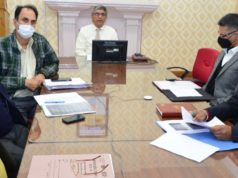 One arrested for brutally assaulting a girl with a knife in...