An official notification was issued by the state government on Wednesday evening.

Shimla (Rural) MLA and son of former six-time CM Virbhadra Singh, Vikramaditya Singh who became the youngest minister in the history of the state has been made the new Public Works Minister. He will also hold a portfolio of Youth Services and Sports.

As per the notification, Veteran leader and senior most MLA Col Dhani Ram Shandil has been made the Health and Family Welfare minister of the state. He will also be holding the portfolios of Social Justice and Empowerment and Labour and Employment.

Chander Kumar will be the Agriculture Minister of the state. He will also hold the portfolio of the Animal Husbandry Department.

Harshvardhan Chauhan will be the Industries Minister of the state. He will also look after Parliamentary Affairs and Ayush.

Former Deputy Speaker and five-time MLA from Kinnaur Jagat Singh Negi will be the Revenue Minister of the state. He will also be holding the portfolios of Horticulture and Tribal Development.

Rohit Thakur, who won elections from the Jubbal-Kotkhai seat will be the Education Minister. He has been allotted Elementary Education, Higher Education, Technical Education and Vocational Industrial Training.

Anirudh Singh, who won elections from Kasumpti seat will be Rural Development and Panchayati Raj Minister.

Meanwhile, Deputy CM Mukesh Agnihotri will look after Jal Shakti Vibhag, Transport and Language Art and Culture, while CM Sukhu will hold Finance, General Administration, Home, Planning, Personnel and all the other departments that are not allotted to any other ministers. 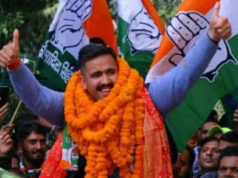