Spread over an area of about 247 acres, this Rs. 1471 crore 750-bedded premier medical institute would provide super speciality medical treatment to the people of the region.

While addressing the public meeting at historic Luhnu ground Bilaspur, the Prime Minister said that the All India Institute of Medical Sciences at Bilaspur would be known as the ‘Green AIIMS’ as it has been built in an eco-friendly manner. He said that AIIMS Bilaspur would not only increase access to affordable healthcare in the State but also provides specialized healthcare facilities to the people of the region nearer to their homes.

He said that the Centre Government during the last over eight years have worked to ensure that benefits of development reach the remotest parts of the country.

Prime Minister said that the State of Himachal Pradesh has played a crucial role in guarding the frontiers of the nation (Rashtra Raksha) and now the AIIMS would go a long way in making Himachal a destination for ‘Jeevan Raksha”.

The Prime Minister also inaugurated Rs. 140 crore Government Hydro Engineering College at Bandla in Bilaspur. He also laid foundation stones of Rs. 350 crore Medical Devices Park to be set up at Nalagarh and Pinjore-Nalagarh four-lane road project to be constructed under the Bharat Mala project with a cost of Rs. 1692 crore. 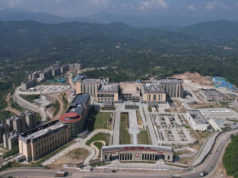 Bhakra Beas Board asks to check spread of silt to fertile...