New varieties have already been notified in the Gazette of India, Prof H.K Chaudhary, Vice-Chancellor revealed in a statement.

Prof Chaudhary informed that the Maize variety “Him Palam Maize Composite-1” is recommended for hill zone of Jammu & Kashmir, Himachal Pradesh, Uttrakhand, Assam, Tripura and Meghalaya and has shown resistance towards diseases. While the oilseed variety Him Palam Gobhi Sarson-1 has substantially low levels of anti-nutritional factors like erucic acid and glucosinolates. It is recommended for Himachal Pradesh, Punjab and Jammu & Kashmir.

New mustard variety ‘Trombay Him Palam Mustard-1’ is tolerant towards aphids. Soybean variety Him Palam Hara Soya-1 is resistant to major diseases of Soybean. New fodder variety Him Palam White Clover-1 is recommended for temperate grasslands, pastures and orchards of North-Hill zone of Himachal Pradesh and neighbouring State of Uttrakhand and U.T. of Jammu & Kashmir.

Vice-Chancellor congratulated the scientists for their significant research accomplishments at the state and national levels.

Prof Chaudhary expressed hope that the farmers would adopt the newly developed varieties to increase their yield and income. 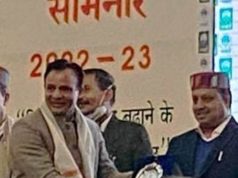