Shimla: State Congress Vice President, Rajendra Rana launched a scathing attack on Prime Minister Narendra Modi led government for pushing the people of the country to the worst ever days.

Rana accused Modi for having failed to provide better health care system to the people at a time when the country suffering from Covid-19 crisis.

The country is plagued by the government’s ruthless apathy in the Covid-19 period and also at a time when inflation is at an all-time high, he charged.

In a press statement issued on Monday, Rana said, ” Life-saving drugs are also getting scarce in this worst phase of Corona epidemic across the country, people are dying due to lack of supply of oxygen cylinders and Corona patients are not getting beds in hospitals. Covid-19 tests are not being conducted on time and even the vaccination campaign is running at a sluggish pace.”

Modi had collected votes with promises of bringing in good days, instead the people are forced to grapple with the worst days ever faced by the country, he blamed.

The growing resentment among the people due to politics of BJP will explode like a volcano and prove to be fatal for the party, he added. 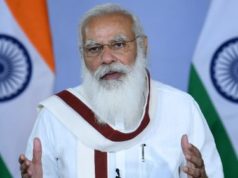