Some of the schemes which the state government talks about in this Budget is about Mandi-Nagchala Airport, Shiv Dham in Mandi district or expansion of Gaggal airport at Kangra and Jubbar Hatti Shimla airport, he said, adding that this again has been repeated as they failed to translate it on ground.

“Rs 1400 Crore budget that the state government boasts for airports has not been granted from the Centre but is part of the grant-in-aid of around Rs 40,000 crore of the total around Rs 80,000 crore recommended by the 15th Finance Commission which has been diverted for the same,” said Vikramaditya Singh.

The state government is misleading the people of the state and there is no contribution of the centre in providing the funds for airport expansion, he added.

As the state is already heavily under Rs 60,000 crore debt, the state government should make announcements keeping in view the fiscal health of the state, he said.

“Jai Ram Thakur will be the first Chief Minister of the state who will be credited with the solitary achievement of burdening the state with Rs 45,000 crore debt during his tenure,” he charged, adding that the there is no mention of resource mobilization in the Budget. Despite all corporations and boards of the state government is running into huge losses, the state governments is spending extravagantly on the luxuries of the Chairman and Vice Chairman of these boards and corporations, he lamented.

” The Shagun scheme of providing Rs 31,000 for daughters of SC, ST and OBC at the time of marriage is a good initiative, however division on caste basis is not a good step and it reflects their vote bank politics. We strongly resent it and want it be based economic criteria,” he demanded.

As far as the much touted 69 National Highways that the Double engine of BJP- led government at the Centre and State boasts of, has only inched to making of DPR stage and only Rs 160 crore has been received so far, he stated.

Seeking to know why the double engine has lost steam, he said that even the various railway expansion projects have also not taken off.

“The Union Railway Minister has even stated that the Bilaspur-Manali-Leh rail project is not feasible,” he said, adding that the Double Engine governments have failed on various accounts to full fill promises made to the people of the state. 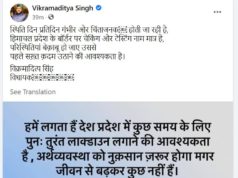 Himachal BJP to back agitation by Patanjali Yogapeeth against land lease...