Law will take its own course, PM Modi on republic day incident

New Delhi: Prime Minister Narendra Modi on Saturday told an All-Party Meeting on Budget Session of Parliament that the government proposal to the farmers on the agriculture laws still stands.

The Union government has offered to stay the implementation of the laws for a period of 12 to 18 months in an attempt to break the deadlock with the protesting farmers unions. However, agitating farmers union rejected the offer and insisted on a complete repeal of the laws.

PM Modi reiterated that the Agriculture Minister is just a phone call away for taking forward the talks.

On references made by the leaders on the incident on 26th January, Prime Minister said that the law will take its own course.

Prime Minister said that the government is open to detailed discussion on issues raised by the leaders in the meeting. He reaffirmed the importance of smooth functioning of Parliament and comprehensive debates on the Floor of the House.

Prime Minister also paid tributes to Mahatma Gandhi on his Punya Tithi. He also condemned the desecration of Mahatma Gandhi’s statue in USA this morning, saying that such an atmosphere of hate is not welcome for our planet. 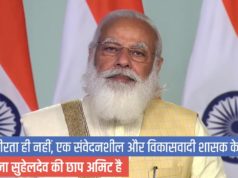 Policy for computer and outsource employees within a month: CM assures