Shimla: Principal Secretary Transport K.K Pant revealed that around 95 percent of road accidents in the State have accrued due to human errors.

Pant, in a meeting of the state level standing committee constituted for road safety on Wednesday, emphasised on a need to create road safety culture amongst masses in the State.

The Principal Secretary said that National Road Safety Month will be observed from 18 January to 17 February with an aim to make people aware for obeying traffic rules. During this, people would be informed about the rules related to road safety through various awareness programs. He said

“it is necessary for measures related to road safety that the participation of the general public be ensured.”

He emphasized to make Panchayati Raj institutions aware and said that the width of land gifted by residents for the construction of roads in public interest is less than the required width making these roads prone to accidents.

Directing strictly adhering to the Supreme Court guidelines on people who assist rescue and other help after accident. He said

“according to the guidelines of the Supreme Court, people who assist in the event of an accident do not face any kind of legal problem. Such person could not be forced by the police or anyone else to reveal the identity. Any passer-by, who assists the person met to an accident, known as Good Samaritan, cannot be restrained in the hospital, cannot be taken to the police station for interrogation, cannot call them to court for testimony and cannot even summoned.” 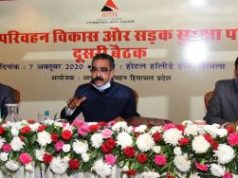 Six killed as car falls into gorge on Sangrah-Haripur road

Himachal: Over 1.85 Crore fine collected for not wearing mask