All the arrested accused are history sheeter have been identified as Ankush, Varun, Sachin, Subhash and Dinesh.

According to Inspector General of Police, Himanshu Mishra during the intervening night of 8 and 9 November the accused wearing masks broke open the locks of UCO bank Narag and attempted to cut open the cash chest by using battery operated cutter, however their attempt was unsuccessful.

“An FIR was registered on 9 November under section 457 , 380 , 511 , 34 IPC at Pachhad police station and investigation assigned to SIT headed by Bisham Thakur SDPO Rajgarh. Based on the electronic and digital evidence, cellphone analytics and physical evidence the accused were arrested. The accused are currently in police remand till 19 November,” he said.

The accused are involved in five more criminal cases under various sections in Himachal Pradesh and Haryana. 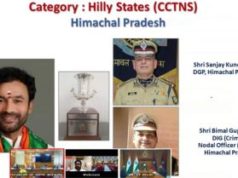 SJVN gets Coal Block for its 1320 MW Buxar Thermal Power...