100 riders from 7 schools competed in the event

Themed “Leaving behind cleaner air and better environment for future generations” the 2nd Edition of Tour De Sanawar was organised by Old Sanawrian association, Hero cycles and HASTPA at the prestigious Lawrence School Campus at Garkhal in Solan district.

More than 100 riders from 7 schools from Chandigarh, Shimla, Kasauli participated in the Tour De Sanawar. Cyclists competed in 3 categories – Open, Students (U18) and Elite.

Mohit Sood, President Hastpa said the youngest rider of the race was 9 years and the oldest was 60 years.

Ashish Sherpa from Shoghi riding for the hero action team took the overall win in the elite category and Sarah from Germany took the win in the Elite Girls.

The running trophy for the race was won by Sanawar and will be competed for in the coming editions.

Aims to make cycling a year-round calendar activity for students, the Sanawar School launched a cycling club with the support of Hero Cycles – the first of its kind in India within a school. Hailing the initiate of the Sanawar School Mohit Sood said

Sood showed keen interest to conduct a inter-school cycling championships. HASTPA president stressed that the sport has tremendous potential to encourage a healthier fitter and greener planet and lifestyle. He said

HASTPA is instrumental in promoting cycling in the state of Himachal Pradesh. Hero MTB Himalayan Rally is annual event being hosted by the HASPTA, which is now being attended by the noted international famed cyclists. HASTPA has successfully promoted cycling in the state and when the whole North India is under thick layer of pollution – mainly because of stubble burning and fuel-burning by vehicles, such event will definitely educate the coming generation about the importance of human-powered transportation system. 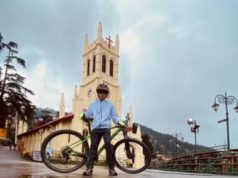