Shimla: Ahead of Lok Sabha election, the state congress has readmitted 40 rebel leaders, who were expelled reportedly for their anti-party activities during the state assembly election.

Committee has rejected the applications of Hardeep Singh Bawa and Puran Chand Thakur. Bawa had contested assembly election from Nalagarh segment, while Puran Chand Thakur had contested election from Drang segment against Kaul Singh Thakur and secured over 7000 votes. In a press communique, Rajneesh Kimta, Gen Secretary State Congress elaborated that the committee has rejected applications of rebel for strong opposition within party and for having criminal record, which the committee is also of the view that re-induction into the party may harm party interest.

Kimta stated that leaders can raise their grievances by giving their representation within 7 days to the Committee. 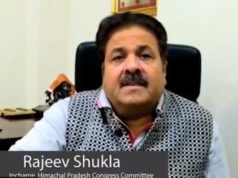