Shimla: In a meeting of Executive Council of H.P. Language, Art & Culture Academy here today Chief Minister Virbhadra Singh directed to clear back log of Academy Sahitya Awards from 2004 to 2006 and further from 2007 to 2012 in one go by June, 2015 and also to revise the procedure for giving the awards from year 2012-13 onwards.

All the awards from year 2004-06 for which the writers have been already identified and that from 2007 to 2012 be given in one go after inviting and screening the nominations of the said period he said.

It was decided to restore the ‘Shikhar Samman’ award which was presented for promotion of art, culture and language and was earlier withdrawn in 2002 during the previous Government’s tenure.

The CM also encouraged the writers to work on contemporary subjects. He suggested exploring possibilities of finding a suitable land or some adequate place for housing the academy which at present was running in private accommodation.

Taking serious note of the substance in the books, the Chief Minister said that only those books would be suitable to be purchased by schools which would contain some matter of children interest lest it was not necessary that every book written may find place on the shelves of the school library not to be read by anyone.

He said the books should contain short stories and poems in Pahari language, further adding that the books rather should be multi-subjected catering to interests of the people and not merely should contain research articles.

Regarding the demand for providing free traveling to the awardees in the field of literature and writings, the Chief Minister said that the matter could be thought of after due consultation with the HRTC. 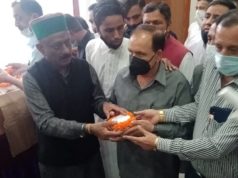