He said that the electricity had been restored upto Moorang and the telecommunication system was now working in the main stations in Reckong Peo, Sangla and Pooh. Besides, four Satellite phones have been provided to the district administration so that relief and rescue operations could be carried out smoothly. He said that 31 Horticulture Extension Officers had been airlifted to various parts of district Kinnaur to assist the fruit growers whereas Rs. 3.13 crore had been released to the Horticulture Department for relief purpose.

Chief Secretary said that to provide relief to houseless people, 30 tents and 400 sleeping bags had been sent to Peo. Besides, 1000 blankets and 500 tarpaulins had been arranged through Deputy Commissioner Shimla and were being sent to Kinnaur.

Roy said that the State Government had already developed various road stretches starting from Tapri to Reckong Peo, old Hindustan Tibet road connecting Reckong Peo right upto Shiaso in Sunnam valley near Pooh. The State Government would be taking up the issue to develop the old Hindustan Tibet Road as all weather-road with Government of India. He said that as per the reports received by 5pm, 158 persons were evacuated today. The total persons airlifted since 18th June, 2013 were 1679 persons. Besides, a team of National Disaster Response Force (NDRF) was also evacuating people from Sangla on foot by assisting them in transhipment in the areas blocked due to landslips. He said that Army was using an alternative route to reach Chulling village which had suffered the brunt of disaster. However, the detailed report on losses from Chulling is awaited, he added.

Chief Secretary revealed that all the tourists had been evacuated and the focus now is on the local people who are stranded in different parts of the district he.

S. Roy said that all the fair price shops except five had already lifted their stock of ration and sufficient essential commodities were available in the district. He said that detailed dispatch for airlifting the ration stocks to various locations of the district had been prepared and ration was being airlifted besides dispatching medicines and pesticides to Pooh and Giabong.

Roy said that work of restoration of PWD roads was in progress and 13 link roads had been cleared so far and it was expected that the link roads in Kinnaur district would be restored by a week or so. 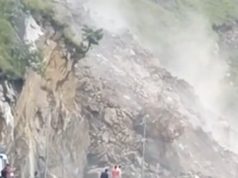