ASHA workers have demanded the government to frame a permanent policy for them, fix their minimum wages and working hours.

While addressing a press conference in Shimla, ASHA Workers State President Satya Ranta said that ASHA workers only receive Rs 2,000 and Rs 1,500 as an incentive from the central government.

She said “It is very difficult for us to survive on such amount. Most of the ASHA workers are single women and many have to bear various expenses.”

“A daily wage worker receive around Rs 400 per day while we are only getting Rs 60 a day. What are we supposed to do with Rs 60 when the inflation is on a continuous rise” she said.

Ranta said that the government had announced Rs 750 for ASHA workers multiple times, but ASHA workers have not received it to date.

She said that ASHA workers are forced to do almost every work and are not paid accordingly. She said that the workload of ASHA workers is too much and despite their efforts, they do not receive even their remuneration on time.

Ranta further said that ASHA workers of far-flung areas especially in Kinnaur and Lahaul-Spiti districts are facing huge problems due to landslides.

“These workers have not even received mobile allowance” she added. 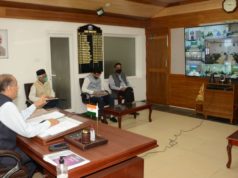 HRTC to add 316 new buses in its fleet