Ladakh: A Day after the threat posted on social media regarding Shri Amarnath Yatra, Ladakh member of parliament Jamyang Tsering Namgyal has suggested opening another route via Ladakh union territory for the holy cave.

He stated that these routes will ensure safety of pilgrims and they will also have opportunity have enjoy the serenity and beauty of the region.

“Pilgrims will also have opportunity to witness the holy Sindhu Darshan and Kargil War Memorial on their way to Shri Amarnath cave,” MP further added.

3,880-metre-high cave shrine of Lord Shiva is located in the upper reaches of the Himalayas and presently accessible from the twin routes of Pahalgam and Baltal in Jammu-Kashmir union territory.

Meanwhile, the government has tightened the security in Jammu after threat posters went viral on social media.

Against the backdrop of COVID-19 pandemic, the Jammu and Kashmir administration haven’t yet decided to open the annual Shri Amarnath Yatra. Decision is likely to be announced in couple of days. 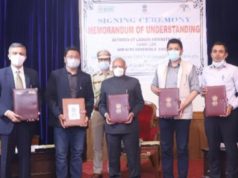 Monkey population reduces by 33.5 per cent