Mandi: Balh Bachaya Sangarsh Samiti has blamed the state government for unilaterally going ahead with the airport project, amid the Covid-19 second wave.

In a joint statement issued here on Monday, Balh Bachao Sangarsh Samiti Chairman Joginder Walia and Secretary Nand Lal criticizing Chief Minister Jai Ram Thakur for imposing a unilateral decision on the farmers of Balh said, that this will not be tolerated.

The Sangarsh Samiti has threatened to intensify their protest after the Covid-19 pandemic to oppose the proposed airport to save the fertile land of the area at all cost.

The committee expressing anguish, questioned the move of Chief Minister, who belongs to a farmer family and is bent on destroying the fertile land of the farmers of Balh, whereas the airport can be built on non-fertile land in other parts of the district.

They said that the survey for the dream project of Chief minister has already been conducted by OLS Duvara in October 2018 on which the Department of Aviation have incurred worth of one crore for the same.

“The Himachal Government (Ministry of Civil Aviation) had MOU on 15 January 2020 between the Government of India, according to that 51%: 49% share, for having 2150 m runway in which ATR-72-seater small airplane is proposed to be build up for domestic flight only,” they said.

For international airport 3150 meters long runway is required according to the OLS survey, the hills of Sunder Nagar (Bandali Dhar) will have to be chopped by 500 meters, which is not possible at this juncture, they added urging the state govt to shift the venue of dream project in different site and save the fertile land.

The Sangarsh Samiti took strong objection to the CM’s statement during the review meeting held in Shimla on May 20, wherein he directed Vepcos Company to complete the quick survey of  Balh Green Field Airport through LIDAR (Light detection and Ranging) to finalize the detailed project report.

They demanded that the proposed LIDAR survey should be done at such a place where Dream International Airport can be constructed in 3150-meter airstrip without cutting the hilhills and without destroying the farmers’ fertile land.

Nand Lal said that about 2500 local families of eight villages Sianh, Tanwa, Jarlu, Kummi, Chhatru, Dhaban, Bhour, Dungrain with a population of more than 12,000 will be affected in the proposed airport area at Balh.

The farmers will be landless and displaced due to the proposed airport, he said, adding that the people of Balh valley are presently living comfortable life by raising cash crops, the proposed Airport will snatch their means of livelihood and render them unemployed.

The proposed airport can be constructed at Nandgarh, Dhangsidhar, Mauviser, which are suitable place in Mandi district, they suggested. 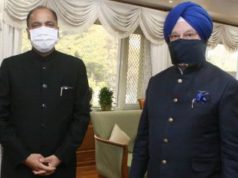 Farmer’s of Balh Valley oppose construction of airport at Nagchala