Shimla: Taking inspiration from the initiative of the government of India of launching “PRAGATI” on-line monitoring system, the HIM Pragati portal launched by Himachal Pradesh government is aiming to provide a platform for monitoring projects and resolving the issues and concerns of the entrepreneurs simultaneously.

The project monitoring unit for projects has been established in H.P Energy Development Agency (HIMURJA) for implementing this system which is responsible for securitizing the uploaded projects, send tasks and issues to the concerned departments and monitor the resolution thereof.

However, the need was felt to create separate interface in the portal while organising global investor’s meet so that issues of those investors could be addressed and all clearances to them could be fast-tracked and monitored by the Chief Minister. As a result, the state government created a new interface in the HIM Pragati portal for the investors and project proponents who have signed the memorandum of understanding with the state government.

As many as 700 MoUs amounting to around Rs. 93,000 crores signed by the state government so far with the investors in various sectors in the state have been uploaded in this interface. The project developers have raised 204 concerns through this interface out of which 154 concerns have been resolved by the concerned departments. Besides, 147 on-going projects amounting to Rs. 18866.30 crore have been uploaded on the Him Pragati portal. The project developers also raised 101 concerns out of which 55 have been resolved.

The resolution of issues and fast-tracking of clearances is discussed in meetings chaired by the Chief Minister. The meetings are attended by the investors and the senior officers to discuss various issues. These meetings are helping in providing feedback for policy action and bringing reforms in the process and procedures.  The government has taken a lot of policy and procedural reforms taking feedback from these meetings.

So far, two such meetings have been organised in which investors expressed happiness as their issues are being monitored at the highest level. The investors are of the view that this platform is a welcome state by the state government which is creating a very positive and investor-friendly environment in the state. 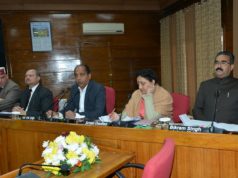 Gajender Thakur speaks on how Manali is shaping into a great...