The most popular festival of India, Diwali, was already celebrated on October 19 this year. The modern Diwali is mostly about crackers, wax candles, artificial electric lights, shopping, and ready-made sweets.

However, for some of the tribal and remote regions of Himachal Pradesh, especially the Trans-Giri region, the Diwali festivities will begin from November 18 onward in the traditional manner last for three days to a week depending upon the region.

Kullu’s Nirmand, some parts of the upper Shimla like Kupvi in Chopal, Tyuni, Solang near Uttarkhand, about 125 panchayats of the Trans-Giri Sirmaur including Shilai and Sangrah, and a few areas of Rajgarh in Solan district would follow the ancient ritual of celebrating the Budhi Diwali.

The Jaunsar Bawar region of Uttarakhand also shares this cultural heritage with Himachal. This year, Jaunsar decided to keep up with the rest of nation and celebrated the Diwali on October 19. But in the remote Himachal, the people are gearing up for the festivities.

It is a curious question as to how the festival derived its name ‘Budhi Diwali’. Before moving on to this question, we should do some literature review.

The Bhudi Diwali is an excellent opportunity to learn more about the Devbhoom’s less known traditions. The cultural heritage and traditions of Himachal are perhaps most diverse in the entire India. The tribal and remote Himachal is much more than what could be found on Internet and books. These regions are so remote that their way of life still remain tribal.

The festival is celebrated on the first Amavasya (moonless night) a month after the main Diwali festival.

If you surf the Internet, then you’ll be told that it is about some tribal people dancing around bonfire, singing folk songs, and playing their traditional instruments.

The most common reason attributed to the celebration of this festival is believed to be that the news of Lord Rama’s return to Ayodhya after an exile of 14-years reached these regions late. It sounds reasonable considering the tough geography and remoteness of these regions.

However, if you go through accounts given by some historians and literature on Hindu culture, you’ll learn more about it.

Some of the literature suggests the real reason behind celebrating Budhi Diwali was to face harsh winters after completion of exhausting task of crop harvesting. The winters are dark and earlier it used to snow by this time of the year. The people had no source of entertainment back then, so they gathered, lit bonfire, drank, ate, sung, and danced.

The region best known for the celebration of this festival is Trans-Giri Sirmaur.

In the Trans-Giri region, the festival is also known as Baliraj dahan. The people take out a sort of large procession at night carrying Mashal’s (flambeau) to a particular spot. It is a scene worth watching. As a courtesy of smartphones and Internet, some villagers have found their way to the YouTube and social media.

The traditional cousins and dishes like sidku, patande, walnuts etc. are used in feasts in Sirmaur. Earlier, one goat from each house of the village was sacrificed to please the local deities. Therefore, meat became integral part of the festivity.

However, the Hatti Kalyan Samiti realized that the celebrations of this fair was burdening the poor. Not all houses were able to contribute a goat or contribute equally to its organization. Several families fulfilled these conditions by borrowing money. Samiti later took care of it. Moreover, the ban on animal sacrifice automatically provided a remedy to the poor.

Prior to the ban, the people also used to offer goats as sacrifice to appease their local deity Shirgul Devta.

Earlier, archery competitions were also held in the traditional manner. The traditional Hudak (हुड़क) and Budha dances mark the festivities on this day in the region.

As contrast to the urban world where people seems to be confined their flats, here people gather to celebrate collectively. It makes a huge social gathering; hundreds of people form organized chain an dance on one tune all night.

The fair starts with a brief recital of Mahabharata and story of Raja Bali in folk songs.

One of the belief behind celebrating this festival is cited to be its associated with the killing of two demons, Dano and Asur, who resided in the regions in form of snakes.

During the day, two ropes are weaved in the shape of snakes using munj grass. At night, they are burned as a part of the ritual. The villagers sing the Kab ballad which has 18 cantos (kandis).

According to a book “The Mahābhārata in the tribal and folk traditions of India” by Kumar Suresh Singh, ‎Anvita Abbi, ‎Anthropological Survey of India – 1994,

A legend goes that on Boodhi Diwali, the Pandvas burnt a bonfire and, in order to wipe out the Kauravas, invited them one by one to pay homage to their common ancestors. The Kauravas started coming to the bonfire turn by turn and the Pandvas would put each one of them into the bonfire,

Not only is the whole Pandava Gatha sung by Fakiri Brahmans in Nirmand, but the villages itself gets dived into two groups- Deva ( being the upper castes) and Danva (being the lower castes). The Deva form a circle around a bonfire while the Danvas try their best to break this circle. This folk ritual vividly illustrated.

In the same book, it is described that during Boodhi Diwali, the Panidts recite the same type of Mantras as are recited at the time of paying homage to the dead.

Another book titled “Hinduism – An Alphabetical Guide” by Roshan Dalal trace back the tradition to the mythological tale of Bana – an Asura, one of the hundred sons of Mahabali.

As per the book, it is believed that the present Sarahan was Bana’s capital city Shiniputra and that Budhi Diwali is celebrated in his honor.

To quote from the book,

According to one legend, Bana ruled the Malana Village in the Kullu region. The rishi Jamadabhi came to Malana along with his wife Renuka and decided to set up his ashram there.

The Bana was angry as Jamadagni intruded his kingdom without permission.

So, while he was in meditation, the Bana captured Jamadangi and put him into a cauldron filled with boiling oil.

When the cauldron was opened after a few days, Jamadagni was still in meditation, unharmed. Bana asks for forgiveness, and Jamadagni agreed, provided the asura left the area, says the book.

However, Bana requested that his language (Kanashi) should remain in the area. The book argues that this is the reason why even the present day Malana has a unique dialect.

If we come to the upper regions of Shimla, the people here celebrate the festival to appease their local deity Mahasu. The festival goes on for five-six days. A bonfire is lit by setting pine and oak twigs and branches ablaze. The animal sacrifice was again a common tradition that this festival used to share with other regions. However, the ban on animal sacrifice imposed by the State High Court has now prohibited it.

The festival in Shimla is said to be caste specific where people perform the ‘Boodha dance’ and, at nights, stage dance-dramas like Karyala. They sing folklores from Mahabharata including warrior folksongs of Harul, Rasas, and Pandvains.

Lastly, the reason behind naming the festival as the Bhudi Diwali is not very clear. One of the reasons is cited to be the grand welcome given to the goddess Laxmi by old women of the village on Diwali. After one month of it, the daughters-in-law worshiped the old women to express gratefulness for the welcome.

Nirmand: A remote village hidden from the world Dignity of deities and Himachali culture to be maintained at any cost: CM 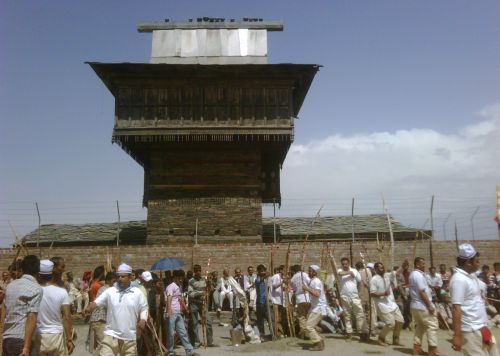