Kalpa in Kinnaur district received 7 cm of snow while Kufri and Narkanda had 2 cm and 5 cm of snow. Jakhu hills of the Shimla city covered with the white sheet of snow. Adjoining Solan received 6 mm of rain while Kangra and Dharamsala lashed with 2 mm and 5 mm of rains, giving a much needed break to the dry spell. A sudden change in the weather has caused drop in mercury. Temperature dipped in Shimla to 3.5 degrees, while Keylong and Kalpa recorded a low of minus 2.1 and minus 1.4 degrees, Bhuntar 2 degrees, Manali 3.4 degrees, Sundernagar 5.8 degree, Solan 7 degrees, Nahan 8.6, Dharamshala 9.8 degrees and Una 10.5 degrees C.

The mild snowfall and rain has also brought cheer to the face of farmers and fruit growers. 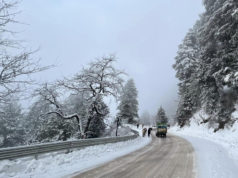