Chief Electoral Officer Narinder Chauhan held a meeting with representatives of all the political parties regarding Mandi Parliamentary Constituency by-poll and aware them with the instructions of Election Commission of India. He revealed that the Flying Squads, Video Surveillance Teams, Static Surveillance Teams etc. had been constituted for greater transparency and monitoring of Election Expenditure. He said that the Media Certification and Monitoring Committees (MCMC) had been constituted to deal with ‘paid news’.

He said that Election Expenditure was classified into two categories. Expenditure, which was allowed under the law for electioneering was Rs.40 Lakhs per constituency. It included campaigning like public meetings, public rallies, posters, banners, vehicles and advertisements in print or electronic media. Items which were not permitted under the law were distribution of money, liquor and any other items to woo the electors.

Chauhan said that ADM’s and SDM’s would be nodal officers of the Expenditure Monitoring Cell at District level. He said that the candidate had to maintain register of election expenditure in three parts given to him by Returning Officer at the time of filing of nomination papers including Part-A in white pages, Part-B in Pink pages and Part-C in yellow pages adding that the candidates have to produce these registers to Expenditure Observer for inspection at least three times during campaign period.

Chief Electoral Officer said that as far as use of vehicles during electioneering was concerned, the permission would be obtained from Returning Officer and it should be displayed in front of the vehicle. Any vehicle used for campaigning without obtaining permission from RO would attract provision of section 171 H of IPC. He said that the vehicle should be used by the candidate to whom permission had been granted and not by any another candidate. 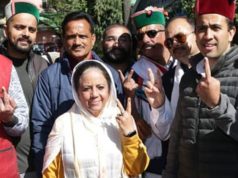 Cong leaders ask Dhumal to resign as leader of Opposition