Regional Transport Officer has been caught red handed by state vigilance and anti corruption bureau when he was taking bribe from a truck driver at Swarghat. The officer was taking bribe as a sum of rupees five hundred. Police has filed a case against the RTO. DSP Vigilance B.D. Negi told that we were receiving so many complaints against the RTO Ravinder Kumar about reciving money illegally from the truck drivers at the Dharam Kanta near by Swarghat. On Thursday, a truck was coming from Punjab and when the driver took the truck to the Dharam Kanta, the Astt. RTO demanded for rupees three thousand. Driver denied for such huge amount and said that he only had rupees 1500. Then the RTO cut his one thousand rupees challan and took five hundred rupees as bribe. The members of vigilance and state anti corruption bureau were already present there and caught him red handed. DSP Vigilance told that they found rupprs 40515 when they raided at his residence, office and his bag. He told that Inspectors Vinod Kumar and Shivpal, Sub Inspector Hari Ram, Head constable Nishant Dabra, Seetaram, Sohan Lal, home guard Raman and Ramesh played important role in this case. 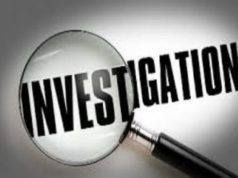