Shimla: As many as 25 people donated blood during a voluntary blood donation camp held on Saturday on the Ridge, Shimla, by Keekli Charitable Trust.

The trust is headed by Vandana Bhagra along with Namita Lal who is the Director Principal of North Oak Public School, Sanjauli.

Ashish Kohli appreciated the efforts of Keekli Charitable Trust for the social upliftment of the society and also for educating the students about this noble cause. He also shed light on MC ongoing project being undertaken under the Smart City project and how things were improving.

Tourists as well as locals showed keen interest and donated blood while ensuring all Covid Protocols were followed.

Of the total of 25 units of blood collected, 12 females and 13 males donated blood.
Expressive and message-oriented posters were exhibited, during the camp signifying the importance of blood donation.

The posters were made by students Aahr Singh, Suhani Prashar, Aarzu Kumra, Pritha Doegar, Jiya Rampal and Prachi, who are all the daughters of the Trustees and are students of Auckland House School, Shimla.

These posters were later handed to the doctors of KNH to be displayed in the Blood Bank, so as to inspire and encourage people to donate blood.

A team of blood bank staff from Kamla Nehru Hospital, headed by Dr Kanchan Singh provided their services in the blood donation camp. 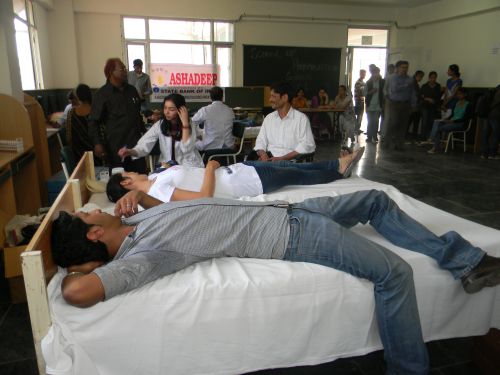