The journey to the holy shrine of Shrikhand Mahadev in Kullu district of Himachal Pradesh provides ethereal natural panorama to the devotees and adventure seekers, who come there every year. Sadly, over the period of times the spiritual place too has been stained with plastic waste.

During 2019 trek, Lalit Mohan, a local boy journeyed up the mountains to enjoy the beauty of nature that he had savoured some years before. To his dismay, the place was filled with people and traces of their presence everywhere.

The single-use plastic waste and other waste material such as glass bottles littered the whole place, even the summit of the holy spot couldn’t escape the pollution as the devotees made their offerings in plastic bags and glass bottles.

The degrading transition of once a beautiful place broke Lalit’s heart and he wrote a letter to the Director of Indian Mountaineering Federation (IMF) to conduct a cleanliness drive in the region. His letter received a positive response from the director of IMF, Col. H. S. Chauhan and a cleaning drive expedition was organized in collaboration with NSS and the Ministry of Youth Affairs and Sports.

A team led by Lalit Mohan, comprising of the members of the Indian Mountaineering Foundation – Lalit Kanwar, Praveen Dahiya, Nikhil Chauhan, Rajat Jamwal and Hemant Sharma was flagged off by the SDM, Anni, Kullu district, on October 2, 2019, and completed their great services on October 14. They started off the cleaning drive from the base campsite Shingad. The Team carried out cleanliness drive at Brati Nala, Reyosh Thach, Khumba, Thathi Bheel, Tharchu, Kali Ghati, Bhim Talai, Kungsha, Bhim Dwar, Parvati Bagh, Nain Sarovar and finished their task off at the Shrikhand Mahadev.

The Team collected 1,900 kg garbage and carried it in 170 sacks to Nirmand in Kullu district.

Nature has bestowed Himachal Pradesh in abundance. Its mountains attract thousands of trackers every year. However, most of its track routes are littered with trash. Wrappers of Maggi, biscuits, bread and eatable items found on the tracks. Most of the adventure seekers never carry their waste back to dispose of that properly. In recent summer, famous tourist town Manali was in news, as travellers trashed the majestic Rohtang Pass and its nearby places so badly as tons of trash were piled on the fragile Rohtang Pass. It’s pertinent to mention that the Beas river originates from Beas Kund, near to the Rohtang Pass. And one can imagine if the source of important river gets polluted by the human interference, we all can well imagine the quality of water it’s flow to the major cities and human settlements on its bank. Snow on the mountains of Himalayan is the source of water for whole North India and for all of us need to take all preventives to stop water from contamination.

Travellers and adventure seekers need to think over it again and again before planning such trip and kindly keep away from mountains if you can’t keep it clean. 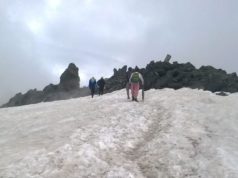