Shimla: To help stranded shepherds at Bara Bhangal in district Kangra, the state government has sent two teams. Chief Secretary B.K Agarwal informed that the team which was left from Baijnath on Friday had reached Holi and today the team have left for Bara Bhangal. 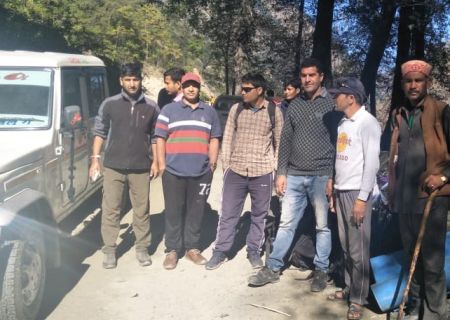 The Chief Secretary said that Deputy Commissioner Kangra Sandeep Kumar after forming rescue team immediately sent them for the task. The team compred of Patwari of Bara Bhangal, four mountaineers crew and three local people who were expert and familiar with the path. He said that 20 pairs of long shoes had also been sent with the team. He said that if shepherds will be in a need of economic assistance, the money had also been sent so that they do not face any difficulty.

He said that the team would camp in Bara Bhangal area and will remain in constant contact with the shepherds and also be in regular contact with the administration to appraise time to time situation.

Chief Secretary said that the second team of 15 members including three trainers from mountaineering Institute Manali and 12 local people would leave for Bara Bhangal on 14th October. This team will depart from Multhan towards Muraldhar-Thamsar. The team had been provided with adequate eatables and blankets. He said that team will try to trace the dead body of a shepherd and bring it back.

He said that district administration Kangra had been issued directions to keep continuous vigil on the situation of Bara Bhangal. He said that adequate eatables were being provided to shepherds.

Bara Bhangal will be connected by road

One killed, 15 hurt in a bus accident