Shimla: To resolve the common issues of Himalayan States, Himachal Pradesh Governor Acharya Devvrat suggested to form a separate ministry at the centre.

Acharya Devvrat, in a conclave of Himalayan States organised here today, said the issues and challenges of Himalayan region were totally different from the plain areas.

The Governor said that for the first time, efforts were being made towards contemplation and solution on this serious topic, for which Union Agriculture Minister deserves appreciation. He said today we talk about global warming, while its main reason was chemical farming. He expressed concern over the fact that various departments and organizations were promoting chemical farming though they were very much familiar of the fact that companies producing chemical products were responsible for pollution and global warming.

The Governor said that he had himself experienced that only natural farming was conducive which had also been confirmed by the scientific data taken from Gurukul (Haryana) fields. Organic carbon of this land had increased from .3 to .9, which was possible due to natural farming. 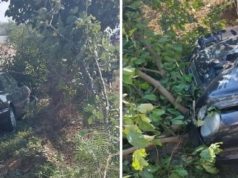 Himachal Guv Bandaru Dattatreya meets with an accident in Telangana Congress to announce candidates for four municipal elections on March 21