Fairs and festivals are the repository of our rich cultural heritage and these should be preserved for the posterity. This was stated by Chief Minister Virbhadra Singh after performing ‘pooja’ at the famous Hatu Devi Temple near Narkanda on the occasion of annual Hatu Mela in Shimla district today.

Virbhadra Singh said that Himachal Pradesh was universally acclaimed as land of fairs and festivals which depict the rich culture of the State. He said that Hatu Temple, situated at the height of 11,151 feet was a centre of faith for people. He said that he himself has been visiting this sacred place regularly for the last over thirty years.

Chief Minister also formally inaugurated the new temple complex constructed at a cost of Rs. 1.25 crore. He said that construction of this temple has been carried out in traditional hill architect and it took four years to complete this complex. He said that this would be a new attraction for visiting Narkanda area besides facilitating the devotees visiting the temple. 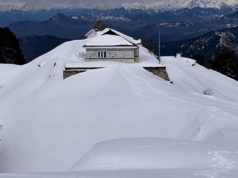 Shimla MC Elections: CPM to contest all 41 wards, rules out...