Higher riches of Himachal Pradesh received fresh spell of snowfall, whereas middle and lower regions lashed with sporadic rains throughout the day.

Manali recorded about 45 cm of snow till this afternoon while Narkanda and Kufri, Dalhousie and Dharamkot (Kangra) had 40, 30, 20 and 35 centimetres of snowfall respectively.

Snowfall has again forced to stop vehicular traffic at Hindustan-Tibet Road beyond Shimla, whereas traffic in Kinnaur district and the upper areas of Shimla district were closed as various link roads in Jubbal, Kotkhai, Kumarsain, Kharapathar, Rohru and Chopal were blocked by snow.

With the snowfall at higher reaches icy winds swept across the entire region as temperature dips at many places. However temperature rose in Keylong from minus 5 degrees to minus 2.7 degrees Celsius. The Met office forecasts more rain and snowfall for the next 48 hours. 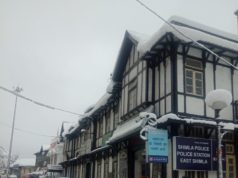