Apart from him, the state government on Saturday transferred and handed over additional charge to three Indian Administrative Service (IAS) officers.

An official notification has also been issued by the state government late Saturday night.

Secretary (Administrative Reforms, Training and FA and RPG) C. Paulrasu has been handed over an additional charge of the post of Secretary (Cooperation), relieving Dr Ajay Kumar Sharma from this charge.

An official notification has been issued by the state government on late Saturday night.

He will be replacing Dr Monica Bhutungru as SP, Shimla. Meanwhile, Dr Bhutungru has been transferred to the post of Commandant, 1st HPAP, Junga.

The state government has also transferred Gurdev Sharma to the post of DIG, (TT & R) in Shimla and Dr Sakshi Verma Karthikeyan as SP, Kullu. 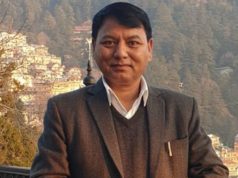