Delhi University on Monday released the schedule for the cutoff lists 2021 for undergraduate merit-based admission.

A total of 5 cut off lists would be released by the University.

University has planned for a special Cut-off list on October 25 and followed by 4th and 5th cut off list on 30th October and 9th November only would be if vacant seats are available.

The entire admission process is expected to complete by November 16, 2021.

The registrations process for the various merit-based undergraduate courses at DU had begun on August 2nd and continued till 31 August. 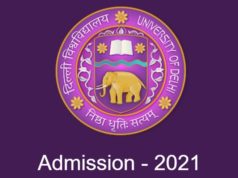