Addressing media persons here on Saturday, BKU (Tikait) Himachal Pradesh, Aninder Singh Notty said that in support of the farming community, BKU along with Samyukta Kisan Morcha will launch the ‘No vote to BJP’ against the three farm laws in the state.

“Our objective is to fight on every front to intensify the movement against the BJP government, which will continue till the demand of repeal of the three agriculture laws is not me,” he said.

Even today the agitation is going on at the five borders of Delhi and the farmers in the states are also agitating at their own level, he said, adding that in Himachal under the banner of BKU, a movement will be started in Himachal Pradesh to oust the BJP at the centre and the state.

He said that a campaign ‘No Vote for BJP’ had been started from West Bengal and it will now be run in Himachal Pradesh in which farmers will mobilize against the BJP in the by-elections to Mandi Lok Sabha and three assembly seats Jubbal-Kotkhai, Fathepur and Arki.

“After the announcement of the by-polls, this campaign will start just as a trailer and the full film will be shown in the assembly elections next year,” he added.

National leader Rakesh Tikait would also participate in this campaign, he said, adding that the localized problems of the farming community and horticulturists will also be raised through this platform.

He urged the state government to procure the paddy produced by the farmers in Himachal and demanded the setting up of at least two procurement centres d in every district.

“The government has not yet compensated the damage caused to the apple crop by the weather. Now the falling prices of apples are happening under a well-planned conspiracy and this is part of a monopoly scheme in the market,” he said, demanding the state government to address the issues.

He said that the union will fight on all the issues of farmers, horticulturist and will also organize agitations at every level to fulfil the demands. 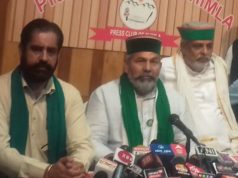