Shimla: Shimla Hotel and Restaurant Association on Wednesday has demanded state government to allow opening of shops and other establishments on Sundays.

A delegation of Shimla Hotel and Restaurant Association led by its President Sanjay Sood today called on Chief Minister Jai Ram Thakur and urged the Chief Minister to allow the establishments serving food and eatables, Restaurants, Dhabas, Cafe to open on Sundays.

The Chief Minister assured the deputation that State Government would consider their demands sympathetically.

Following the sudden spike in the COVID cases, the administration has imposed night curfew and also closed the market on Sunday. Due to COVID pandemic business establishment have already suffered a lot and now new restriction, during Christmas and New Year week, pitching the hospitality industry hard and also fading their hope to recover in this last business session. 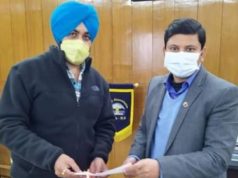 Over 48 thousand youth to be trained for disaster mitigation