Mid Day Meal Scheme, the world’s largest school feeding programme started by the Government of India for the students of primary schools, is being implemented successfully by the Elementary Education department in Himachal Pradesh. The department has been successful in achieving primary objective of enhancing enrolment, retention and attendance and simultaneously improving nutritional level among the school children under the scheme.

The Elementary Education department has constituted School Management Committees (SMCs) in all the schools for effective implementation of this scheme. High calorific value food satisfying prescribed nutritional norms is being served to the children and cooked in the separate constructed kitchen-cum-stores in the schools. 14959 kitchen-cum-stores have been sanctioned for this purpose; out of which 13638 have been completed and remaining 1321 are in progress.

Government of India has provided assistance to construct kitchen-cum-store in a phased manner up to a maximum of Rs. 120000 per unit. A sum of Rs 5000 is being provided for utensils and other kitchen devices in each school. Apart from this the schools have been designated with the power to incur expenditure on the items like cooking devices, containers for storage of food grains and other ingredients like utensils for cooking and serving. An amount of Rs. 371.15 lakh has been sanctioned in the current financial year for this purpose.

Presently, 23793 cook-cum-helpers have been engaged by the SMCs to cook the food in the schools and preference is being given to the weaker section of the society for the work. Provision has been made to transfer honorarium of cook-cum- helpers directly in their bank account through e-transfer. During the last financial year 625494 students were benefited by this scheme in 15197 schools in the State.

As many as 10445 cook-cum helpers have been trained for maintaining hygiene. Regular cutting of nails, washing hands, and feet with soap before commencement of cooking/serving etc is being ensured. Regular health check up of cook-cum helpers has been made mandatory. Eighty percent cook-cum-helpers are women. A toll free telephone no. 18001808007 has also been installed in the Directorate of Elementary Education to receive and dispose off complaints, if any on priority.

Food Corporation of India (FCI) is responsible to ensure the continuous availability of adequate food grains and schools have been allowed to lift food grains a one month advance, to ensure uninterrupted supply of food grains.

Ingredients used for cooking, food grains, pulses, vegetables, cooking oil and condiments etc. are being procured at the school level by the concerned SMCs. This has helped teachers to concentrate on their regular teaching job.

In the interest of environmental protection, smokeless chullah are being preferred and as many as 84 schools have LPG connections in the State. Moreover, water purifiers have been installed with the help of different organisations, Banks, NGOs and other stakeholders and are being made available in schools in phased manner.

Necessary intervention, like regular health check up of the students providing supplements of micronutrients, de-worming, vitamin-A supplement, iron and folic acid supplements and other appropriate supplementation depending on common deficiencies found in local area is being done in collaboration with the NRHM under health Department. Visibility problem of students is also being addressed and spectacles were distributed to 2064 students in 2013-14 after proper check up.

Rs. 100 crore to be spent during this financial year

Ashok Sharma, Director, Elementary Education, revealed that around Rs. 100 crore will be spent under the programme during this financial year for which 80 percent of the funds will be given by the Government of India. He said that funds are being provided through e-transfer to avoid any delay and ensure transparency. 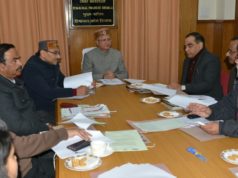