Residents of Darcha Gram Panchayat of Lahaul and Spiti district objected the 300 MW Jispa hydro power project and asked Chief Minister Virbhadra Singh to cancel it in the larger interests of the local people.

Delegation apprised Chief Minister that this project would have adverse effects on the lives of the people and ecology. The Chief Minister assured the delegation that their demand would be consider sympathetically and the decision would be taken on merits and demerits of this hydropower project.

Like other big power projects in Lahaul & Spiti, 300 MW Jispa hydro power project had also faced stiff confrontation from locals. Initially five affecting panchayats were opposing the project, but now it’s reported that only Darcha protesting against it. To oversee the concerns of Panchayat, the project has also been shifted 3.2 km upstream from Jispa. As per the new plan, dam of the project will displace 74 families and Himachal Pradesh Power Corporation Limited (HPPCL) has claimed to offer to rehabilitate the all affected families to a place of their liking and has given them job guarantees.

Jispa was recognised as a project of national importance in 2008, but locals’ resistance made the Central government hand it over to the state government. A sustained dialogue process has been going on with the locals since 2010.

Jispa hydroelectric power project, which is already behind its schedule, was aiming to regulate the flow of Chenab’s water to Pakistan and give India its share of 1.7 million acre feet (MAF) of water as part of the Indus Water Treaty signed in 1960. The water is now flowing to Pakistan unregulated because of the absence of the dam. 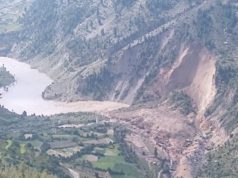