The issue of irregularities in opening private universities in State rocks the Assembly session. Dalhousie legislature and former cabinet minister Asha Kumari raised an issue of the purchase of excess land by private universities and apprehension with regard to their credentials and degrees being issued.

Raising the issue during Question Hour, the Congress legislator asked whether or not the state government had tried to verify if the universities were adhering to norms laid down by the University Grants Commission (UGC).

While replying to Asha Kumari’s apprehensions, Chief Minister Virbhadra Singh said an inspection of only six of the 15 private universities had been undertaken by UGC teams so far and a report in regard was yet to be given to the government.

Asha Kumari also sought in detail the reason as to why the private universities were allowed to purchase hundreds of bighas when the requirement was merely 50 bighas. She said the total land bought by the universities was almost 5,000 bighas and it was the duty of the government to ensure that those are following all norms. 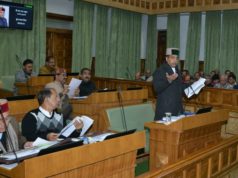