Himachal Cricket team has lost its important match to Vidarbha at the Himachal Pradesh Cricket Association Stadium in Dharmasala. Vidarbha completed three-wicket win against the host team. While chasing 254, once Vidarbha were in some trouble at 110 for 6, but veterans Hemang Badani and Sairaj Bahutule came good to carry them home. The pair put on 132 for the seventh wicket. Bahutule fell for 61 with victory in sight, but Badani stayed till the job was fully done, finishing unbeaten on 83. In the match Himahcal batting let team down as except S Sriram and A Bali, none of Himachal’s batsman score fifty. In the first inning Himachal batting collapse at 195, bowlers helped good comeback for the team and bowled the opposition at 142, but again in the second inning batsman failed to score and bowled out for just 200. IPL fame PC Valthaty failed in both innings. With the win Vidarbha tops the table of Group A, just above Himachal. 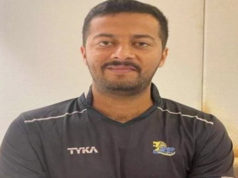 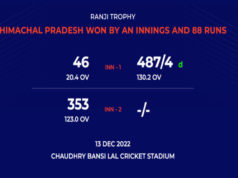