There is a lot of emphasis on applying digital technology in the current annual budget. There are plans to push growth in many sectors with the help of digital engines. The Reserve Bank of India will issue a Digital Rupee of its own. A Digital University will be established. Digital banks will be set up across India. An e-portal will be created for skilling and employment purposes. Kisan Drones will be used to make agricultural operations easier and faster.

A digital university will be formed, in which education will be available in regional languages. Under this initiative, the One Class, One Channel scheme will be applied. At present, 12 TV channels are engaged in the work of imparting education, whose number will be increased to 200. Through these channels, education from class 1st to 12th will be possible. TV sets will be installed in every classroom.

According to the plan, digital banks will be set up in 75 districts of the country. Through these, it will be possible to save time and money. Common consumers will get convenience from the arrival of these banks. In addition, post offices and banks will be interconnected, so that money from post offices can be sent directly to banks. Similarly, a huge digital platform will be created, which will be linked to 16 ministries. The ministries to be brought under one umbrella with the intention of strengthening infrastructure will include roads, railways, power, petroleum and gas, shipping, telecom, civil aviation and industrial parks.

The new infrastructure plans will include 109 new airports, 51 heliports, 12 water aerodromes, 2,000,00-kilometre-long highways, 200 mega food parks, etc. The length of national highways will be increased by 25,000 km. The expansion of roads will give impetus to the country’s economy. An e-portal of the digital ecosystem will be started for skilling and employment. This portal will be used to enhance the skills of youth through a digital medium. Digital teachers will be hired to develop digital content. 750 virtual laboratories of mathematics and science are also to be started this year.

The number of farmers using high technology is currently less than one percent. But it is good that at least a step is being taken to use technology in agriculture. Such plans should be welcomed. Farming has always been far from technology. The use of technology like telecom, internet, social media and drones will certainly usher in a revolutionary change. 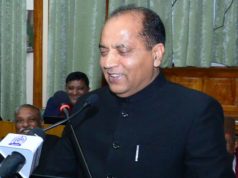