Nanaji Deshmukh and Bhupen Hazarika were selected for the award posthumously.

The Bharat Ratna will be conferred after a gap of four years. A Rashtrapati Bhavan communique, on the eve of the 70th Republic Day, said the President was pleased to award Bharat Ratna to Nanaji Deshmukh (posthumously), were given the award by the Modi government in 2015.

The Prime Minister Narendra Modi congratulated Bharat Ratna Awardees. PM Modi hailing the contribution of veteran politician Mukherjee, Modi stated, “Pranab an outstanding statesman of our times. He has served the nation selflessly and tirelessly for decades, leaving a strong imprint on the nation’s growth trajectory. His wisdom and intellect have few parallels. Delighted that he has been conferred Bharat Ratna.”

PM praised Nanaji Deshmukh for his contribution to the society and said “Nanaji Deshmukh’s stellar contribution towards rural development showed the way for a new paradigm of empowering those living in our villages. He personifies humility, compassion and service to the downtrodden. He is a Bharat Ratna in the truest sense.”

“The songs and music of Bhupen Hazarika are admired by people across generations. From them radiates the message of Justice, harmony and brotherhood. He popularized India’s music traditions globally. Happy that the Bharat Ratna has been conferred on Bhupen Da.” the Prime Minister said.

The Bharat Ratna is the highest civilian award of the Republic of India. Instituted in 1954, the award is conferred “in recognition of exceptional service/performance of the highest order”.

The first recipients of the Bharat Ratna were politician C. Rajagopalachari, philosopher Sarvepalli Radhakrishnan, and scientist C. V. Raman, who were honoured in 1954. Since then, the award has been bestowed upon 48 individuals.

The President of India has approved conferment of 112 Padma Awards including one duo case (in a duo case, the Award is counted as one). The list comprises 4 Padma Vibhushan, 14 Padma Bhushan and 94 Padma Shri Awards. 21 of the awardees are women and the list also includes 11 persons from the category of Foreigners/NRI/PIO/OCI, 3 Posthumous awardees and 1 transgender person. 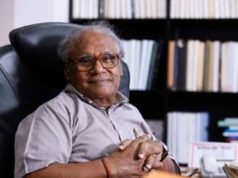