Himachal Pradesh has made big strides in Education over the years in terms of substantial improvements in the literacy level, universal access and equity through a sound network of educational intuitions. Net enrollments ratio in respect of Elementary Education has almost reached 100 and the State is poised to achieve universal access to Secondary Education by 2017 as per the target.

The state Government claiming to provide quality elementary education to all children of 6 to 14 age group in the State. Ensuring easy access to the schools the state government giving added importance to open new schools in the state. During last three years as many as 210 primary schools have been upgraded to Middle standard besides opening of 121 new primary schools. As many as 830 posts of different categories have been created for the newly upgraded schools.

PTA grant for TGT has been increased from Rs. 6950 to 12510 and for C&V teachers from Rs. 6750 to 12150. The monthly honorarium of Primary Assistant Teachers has been enhanced from Rs. 7500 to Rs. 8900. The Government has decided to allow benefit of an increment on promotion from JBT to Head Teacher in Elementary Education.

The Government had decided to restore the services of terminated teachers appointed under PTA policy and treated the said posts filled up.

In order to improve the learning standard of students at Elementary level, it has been decided to conduct end term assessment/evaluation of classes 5th and 8th externally.

Low income criteria has been increased from Rs. 12000 to Rs. 35000 for issuing Low Income Certificate in favour of deserving persons for taking benefits under various Central/ State welfare schemes for the appointment of Part Tme Water Cariers (PTWC) in the State.

Honorarium of PTWCs has been increased from Rs.1300 to 1500 per month w.e.f. 01.04.2014 and from 1500 to 1700 per month w.e.f. 01.04.2015. 829 Part time water carriers were appointed in various Government primary schools during last three years. 164 Clerk-cum Data entry operators were also appointed in Elementary Education Department on outsource basis. Qualifying service of contract employees has been revised from six years to five years for regularization. All Part-time Class-IV workers after completing eight years of continuous service as on 31st March 2014 were being made daily wagers. 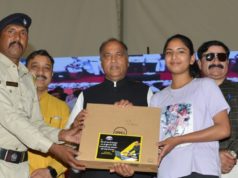