MeT department said that the southwest monsoon in Himachal Pradesh would be delayed by over a week. Monsoon normally hits the Hiamchal by June 27, but this time there was no possibility of arrival of it in the state before next week.

Last year it was well in time and reached here by June 24, but this time its delay can harm farmers as the state’s agriculture and horticulture economy is highly dependent on rainfall. Because of no rain and delay of monsoon, temperature in many parts of the State is rising, even though temperature of Shimla itself recorded on the higher side. Many time it crossed 30 degrees, which is rare.

Shimla recorded a high of 27.4 degrees Celsius, while it was 35.6 degrees in Dharamsala, 40.4 degrees in Una town and 25.4 degrees in Kalpa in Kinnaur district. 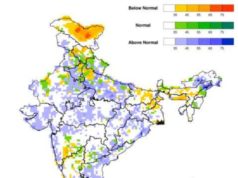 BJP Govt taking credit ahead of the Assembly polls by inaugurating...