Shimla: Devendra Kumar Sharma, Chairman, Himachal Pradesh Electricity Regulatory Commission has been nominated as a specialist member of the National Committee on Dam Safety by the Ministry of Jal Shakti, Government of India.

Er Sharma’s tenure would be of three years.

The National Committee on Dam Safety has been constituted as per provisions of the Dam Safety Act, 2021 passed by the Parliament and notified in the Gazette of India on 14th December 2021.

Devendra Kumar Sharma who joined as Chairman, Himachal Pradesh Electricity Regulatory Commission on 26th September 2020 has more than 40 years of experience in energy and water resource sectors in India and abroad.

Prior to joining Regulatory Commission, he worked as Chairman, Bhakra Beas Management Board, Ministry of Power, Government of India. Earlier, he was Managing Director of Himachal Power Corporation Ltd. (a Govt. of Himachal Pradesh Undertaking) from September 2012 to April 2017. 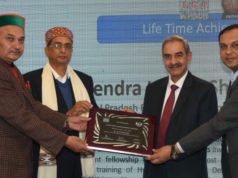