Methanol is a clean burning drop in fuel which can replace both petrol & diesel in transportation & LPG, Wood, Kerosene in cooking fuel. It can also replace diesel in Railways, Marine Sector, Gensets, Power Generation and Methanol based reformers could be an ideal complement to Hybrid and Electric Mobility.

Methanol Economy is the “Bridge” to the dream of a complete “Hydrogen based fuel systems”. Methanol is a scalable and sustainable fuel, that can be produced from a variety of feedstocks like Natural Gas, Coal (Indian High Ash Coal), Bio-mass, Municipal Solid waste and most importantly from CO2. The Concept of “Methanol Economy” is being actively pursued by China, Italy, Sweden, Israel, US, Australia, Japan and many other European countries. 10% of fuel in China in transport Sector is Methanol.

Methanol burns efficiently in all internal combustion engines, produces no particulate matter, no soot, almost nil SOX and NOX emissions (NEAR ZERO POLLUTION). The gaseous version of Methanol – DME can blended with LPG and can be excellent substitute for diesel in large buses and trucks. To adopt Methanol as a transport fuel, it requires minimal infrastructure modifications and capital both in vehicles and in terminal and distribution infrastructure. Methanol 15 % blend (M15) in petrol will reduce pollution by 33% and diesel replacement by methanol will reduce by more than 80%. Urban Transport contributes to close to 40% towards urban air pollution.

Annually 400000 deaths take place in India due to air pollution. Field trials are under way for India to adopt M15 program in transportation sector. The notification of fuels for M15 & M100 are already complete. Methanol 100% engine will look to replace diesel in its totality.

One of the reasons why Methanol has the potential to be an enduring solution to human energy needs is because the beltched out C02 (greenhouse gas emission) both from using Methanol and while producing Methanol can be tapped back to produce Methanol. Thereby a seamless loop of CO2 sequestration cycle is created to perpetually burn fuels without polluting the environment at all. C02 from steel plants, Thermal Power plants, Cement Plants etc. can be tapped in large quantities to produce Methanol. The Technology has acquired commercial maturity and countries like Iceland are producing in meaningful quantities already.

NITI Aayog has drawn out a comprehensive plan to replace 20% of crude imports from Methanol alone. Adopting Methanol in this scale would bring down pollution in the country by more than 40% and not to forget the benefits from import substitution. Over a period of time of time diesel can completely be done away with. Indian Railways alone burns three billion litres of diesel every year. Plans are in place to convert 6000 diesel railway engines to work on 100% Methanol and make railways a carbon neutral organisation.

The other sector where Methanol is becoming the fuel of choice because of emission benefits is the ‘Marine Sector’. IMO Regulations on Sulphur particulates and NOX (0.50% m/m on and after 1 January 2020) will make it compulsive to switch to a clean fuel. Project is underway convert Ro/RO (Roll on & Roll Off) vessels in to Methanol, which will run on the National Waterways for Inland waterways-based transportation. 500 barges will be converted to run on 100% Methanol replacing heavy oil or bunker oil. All this will result in a massive reduction of pollutants into our seas and rivers.

Other major area where methanol can reduce pollution is the Energy sector. India has an installed capacity of 22000 MW on HFO (Heavy fuel oil) alone. HFO is one of the dirtiest fuel and most countries of the world have abandoned it. The entire HFO usage can be replaced by Methanol. Power Modules of Mobile Towers (about 750000) in India can fully be replaced by Methanol Reformer / Fuel Cell based platforms in the next two years. Diesel industrial Gensets, Gas Turbines running on Naptha, LFOI (Light Fuel Oil) and other dirty fuels can also be fully replaced. Industrial boilers which are running on diesel will also be replaced with Methanol.

India by adopting Methanol can have its own indigenous fuel at the cost of approximately Rs. 19 per litre at least 30% cheaper than any available fuel. Methanol fuel can result in great environmental benefits and can be the answer to the burning urban pollution issue. At least 20% diesel consumption can be reduced in next 5-7 years and will result in a savings of Rs. 26,000 crore annually. Rs. 6000 crore can be annually saved from reduced bill in LPG in the next 3 years itself. The Methanol blending program with petrol will further reduce our fuel bill by at least Rs. 5000 crore annually in next 3 years.

Methanol Economy, if adopted by India can be one of the best ways to mitigate the Environmental hazards of a growing economy. NITI Aayog is preparing a road map for a full-scale implementation in the near future. 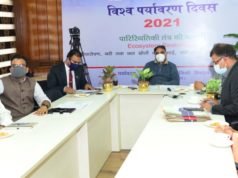