This is the thirty eighth consecutively successful mission of PSLV. The total weight of all the 104 satellites carried on-board PSLV-C37 was 1378 kg.

PSLV-C37 lifted off at 0928 hrs (9:28 am) IST, as planned, from the First Launch Pad. After a flight of 16 minutes 48 seconds, the satellites achieved a polar Sun Synchronous Orbit of 506 km inclined at an angle of 97.46 degree to the equator (very close to the intended orbit) and in the succeeding 12 minutes, all the 104 satellites successfully separated from the PSLV fourth stage in a predetermined sequence beginning with Cartosat-2 series satellite, followed by INS-1 and INS-2. The total number of Indian satellites launched by PSLV now stands at 46.

After separation, the two solar arrays of Cartosat-2 series satellite were deployed automatically and ISRO’s Telemetry, Tracking and Command Network (ISTRAC) at Bangalore took over the control of the satellite. In the coming days, the satellite will be brought to its final operational configuration following which it will begin to provide remote sensing services using its panchromatic (black and white) and multispectral (colour) cameras.

The imagery from the Cartosat-2 series satellite will be useful for cartographic applications, urban and rural applications, coastal land use and regulation, utility management like road network monitoring, water distribution, creation of land use maps, change detection to bring out geographical and manmade features and various other Land Information System (LIS) and Geographical Information System (GIS) applications. The data sets could be used for urban planning of 500 cities under the Amrut Planning Scheme. The government initiative of 100 smart city programme in which these data sets could be used for master plan preparation and detailed geospatial data preparation for rural roads and infrastructure development.

This mission involved many technical challenges like realising the launch of a large number of satellites during a single mission within the time frame sought by the customers from abroad. Besides, ensuring adequate separation between all the 104 satellites during their orbital injection as well as during their subsequent orbital life was yet another challenge associated with this complex mission. 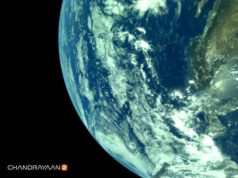