AAP, which today released second list of 30 candidates for the Lok Sabha election, declared his candidature from prestigious Kangra Parliamentary.

Sushant, four times legislature and MP was one of founder member of BJP in the state, has resigned from the BJP few days back and joined AAP. During the BJP Govt, Rajan Sushant was quite vocal about his revolt against Prem Kumar Dhumal and few other party members of the State and blaming them for corruption and anti development policies.

Initially, the party Central Parliamentary Board suspended him from the primary membership of the party, but he continued his vocal attack on Dhumal and even demanded his narco-analysis test and his then cabinet ministers over corruption.

During the HP Assembly election, it was predicted that He could join Himachal Lokhit Party (HLP), breakaway faction of BJP, and before election even his son Dhairya Sushant was named HLP’s youth wing president. However later Sushant taken u-turn and fielded his wife as an independent candidate in Assembly Poll, which she lost. 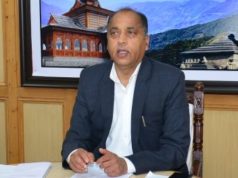