Katoch, who was officer on special duty in 2009, has been booked for misappropriation of funds for the welfare of ex-servicemen. The irregularities were detected after a probe on the basis of a complaint to the Vigilance Department, which was forwarded to the police. 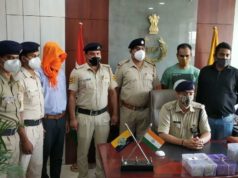 One arrested with 4.4 kg of pangolin scales in Hamirpur BSNL Shimla resort to Gandhigiri to recover bills from defaulters

Cabinet approves to create 18 posts of various categories in directorate...