Agitated Himachal Road Transport Corporation (HRTC) employees have overturned the prior decision on the proposed strike and made clear that if their demands are not met they will go on strike on 19th and 20th June. Agitated HRTC employees said that few self proclaimed leaders have decided to call off the strike and that was not the decision of employees.

However, the management of the HRTC has termed the proposed two-day strike of employees as unjustified and asked them to discharge their duties as usual on June 19 and 20. It has also issued a public notice, asserting that as all demands of the employees have been accepted and after it any call for observing a strike was unjustified.

The aggrieved employees are demanding, among other things, conversion of the corporation into roadways on the Punjab pattern and regularisation of contract and ad hoc staff after the completion of three years of service.

The financial benefits granted to the employees listed in the public notice include release of arrears of pay revision amounting to Rs 28 crore, Rs 8 crore as overtime allowance, 66 per cent increase in wages of contractual drivers, 291 per cent in the case of contractual conductors and clerks and 210 hike for contractual Class IV employees.

It has been decided to regularise the services of 25 water ladies engaged on a contract basis and release 20 per cent of the grant-in-aid in the Pension Trust every year. Further, 1 paise per km would be provided to make the Pension Trust viable.

It had decided to constitute a sub-committee consisting of representatives of government and employees’ unions to suggest ways and means for converting the corporation into roadways. The committee would submit its report in a time-bound manner.

The joint coordination committee of Himachal Road Transport Corporation (HRTC) Employees Unions called off their proposed two-day strike call from midnight today following an agreement reached with the management. Transport Minister Mohinder Singh, who held talks with the union leaders, told mediapersons that the strike call has been withdrawn.

As per the agreement, the government would constitute a high-powered committee within fifteen days to examine the main demands of the Union to convert the HRTC into Roadways (a government department). The committee would discuss the matter with all concerned including the employees unions and give its recommendations within six months. 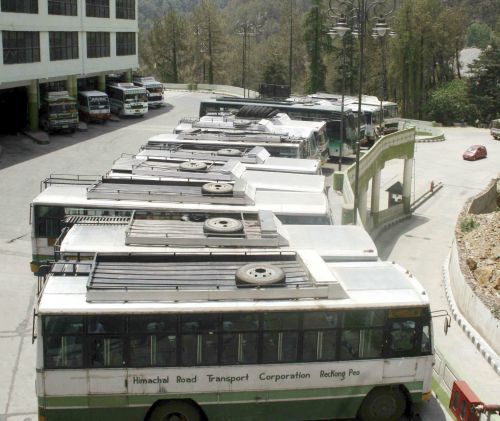