The National Green Tribunal (NGT) granted three months to the Himachal government to enforce the ban on the movement of all diesel operated tourists’ vehicles to Rohtang Pass.

The NGT, during its hearing in New Delhi, ordered to restrict the number of vehicles to 1,000 per day – 600 petrol and 400 diesel powered vehicles to Rohtang Pass on a daily basis with hefty congestion charges of Rs 1,000 for petrol vehicle, Rs 2,500 from diesel vehicles and Rs 5,000 from Commercial vehicles with above six seating capacity.

Meanwhile, taxi operators were not pleased with the order and claiming of affecting their livelihood adversely. As per reports, taxi operators and hoteliers have decided to move the Supreme Court against the high congestion charges.

In its earlier orders, NGT had asked Himachal government to stop movement of all diesel vehicles on Manali-Rohtang highway for tourism beyond Vashisht from May 1 and later gave relaxation of five days, which was to end on 5th May. 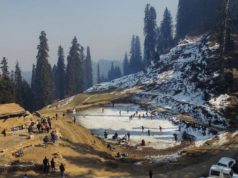