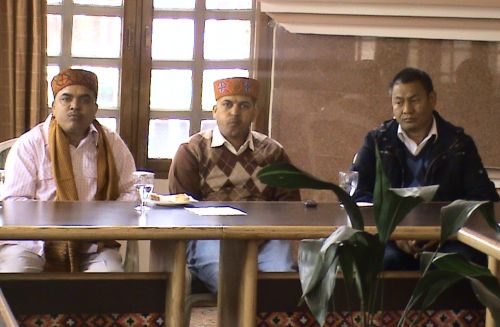 Rajasthan Government’s State Minister of Transport and Public relations Ashok Berwa is on his tour of Himachal. Today he reached Manali and paid obeisance in historic temple of Hadimba Devi. He performed a short puja in temple and returned to Chandigarh the same day. While talking to TheNewsHimachal, he said that Himachal and Rajasthan are the two tourist destinations, where people come from all over the world. Minister said that nature has bestowed all the blessings to Manali, which makes it worth living and paradise on earth. Earlier he had visited the temples of Naganguli in Jaisinghpur and Chamunda Devi in Kangra and took the blessings of Mata on the occasion of Navratras. On reaching Manali Minister was received by Lahul and Spiti Zila Parishad vice Chairman Rigzin Hayerpa and tea party was hosted in his honour. Vice chairman of the Kangra Bank Bhagwan Dasswas also present there, he also accompanied Minister all during his tour in Himachal.