Chandigarh: In a major step to check stubble burning during the paddy season, the Punjab government has decided to permit certain categories of industries to install paddy straw fired boilers to claim fiscal incentives.

The industries which can get this benefit Include Sugar mills, Pulp and Paper mills and any industry having boiler installation with a steam generating capacity of more than 25 TPH.

New and existing units of distilleries/breweries proposing the replacement of old boilers or expansion with installation of new boilers will also have to mandatorily use paddy straw as fuel in boilers, it was decided in a latest state cabinet meeting.

It has also okayed for non-fiscal incentives to industries in terms of availability of Panchayat land for storage of paddy straw with lease agreement up to 33 years with a rate of increase in lease @6% per annum. Apart from this, balers would be made available on priority in areas where paddy straw is used as fuel in boilers.

The move would help in tackling the menace of stubble burning during harvesting of Kharif crops, thus also conserving the fertility of the soil and saving the beneficial micro-organisms.

The decision assumes significance in view of the challenge of managing crop residue. Post harvesting, where the wheat straw is used as fodder for the livestock, paddy straw in the fields is set on fire by the farmers to quickly clear their fields for the next crop.

Due to field fire incidents during the month of October-November, the problem of air pollution is widely prevalent in and around the rural area, causing major health effects. Due to the climatic conditions, the air quality in the NCR region also deteriorates, with contribution from various local sources such as domestic, vehicular, industrial and municipal solid waste dump fires. However, farm fires in the neighbouring states are also blamed for air pollution in the NCR.

Paddy is cultivated in 31.49 lakh hectare area (2020) in Punjab, resulting in the generation of about 20 million tons of paddy straw. 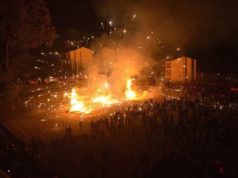 Will conduct drive to assess air quality, noise pollution during Diwali, Says PCB, Urges people to say ‘No to Firecrackers’